Diminishing returns of powder vs. velocity

Diminishing returns of powder vs. velocity

The following should be interesting to you Browning .40-65 BPCR owners. I’m working on an article on the BACO JIM410410M1 bullet (408.7gr using 16:1 alloy) in the Browning with Swiss 1.5Fg & needed some velocity data vs. powder capacity. I thought I’d share the data. I did not shoot for accuracy, only over a chronograph to determine average velocities for each load. 5 shots were fired with each load and I wiped between shots. A chart with the data is below. BTW, it’s always been my rule-of-thumb not to compress Swiss 1.5Fg more than 0.1” for best accuracy, which is not confirmed or unproven by the chart

Since the chronograph provided standard deviation data, I included it even though it should not be taken as an absolute indication of accuracy due to other factors also affecting accuracy. Although, with that said, the two lower SD values in the chart do coincide with the best two accuracy loads for my rifle with the 410410M1 bullet.

Another observation: if you do the math you’ll note that the changes in compression are about 0.026” per grain. This is due to the Browning chamber having a constant diameter 0.5” long neck resulting in each additional grain of powder being compressed the same amount. In chambers such as the Shiloh .40-65, the neck has a constant taper resulting in more compression required for each additional grain of powder assuming the bullet seating depth does not change. 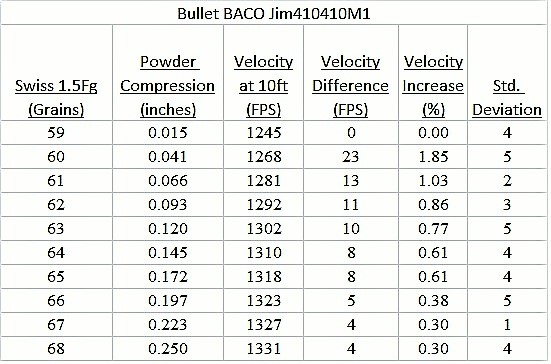